It had rained all night, but morale hadn’t bottomed when we arrived at the trailhead around 6:30 AM. The rain had stopped and the clouds were parting, but within seconds of stepping out of the rental car, the sky unloaded a burst of wind and heavy rain. We hopped back into the car to wait it out. Morale was low. From all of the reports I had read over the prior months, I knew we had 11 miles of steep, narrow, hot and slippery trail ahead with sufficient opportunities to die.

The first couple of miles of trail required a mix of climbing slippery rocks and descending even slicker red dirt. Combined with rain, the clay-like red dirt packed like an ice rink, and we planted our trekking poles firmly every step. There was a High Surf Advisory for the Na Pali coast and looking back, the foreboding rumbling of the waves against the cliffs now seems prophetically earthquake-like.

We arrived at the first river crossing unscathed, but worried that the wet conditions might prevent us from safely completing the trip. At its highest, the crossing was about waist deep, but safe enough. Here we met our first human who was on her way out of the valley. Our primary concern was an infamous section of trail called “The Cliffs”, “Crawlers Ledge”, or just “The Scary Section.” Our fellow hiker had passed through this area the day before and didn’t warn us of any dangers ahead. Her optimism massaged the knot in my stomach. 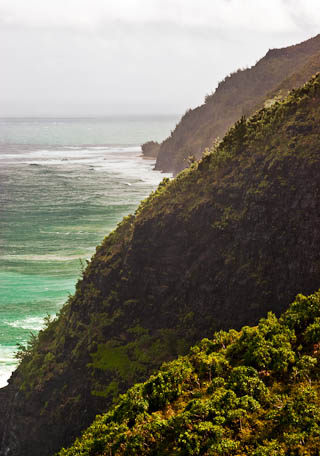 The next human we met had crossed “The Scary Section” just a few hours before and warned that the rain had made it pretty slippery. I asked whether he thought it was a bad idea to attempt. He replied enigmatically, “if you’re afraid of heights, I wouldn’t try it.” Unsure of whether we are in fact afraid of heights or not, we decided to continue, especially after he mentioned the delicious passion-fruit, guavas, oranges and lemons in the valley. We nervously kept on hiking.

For more context on the scary section, I had watched every YouTube video and read every blog post about this section of trail to determine the danger in attempting this. Many quivering legged people have turned back at this point in the trail due to rain or exhaustion. Others have turned back due to the overwhelming aesthetics of this narrow stretch of trail, etched into the side of a deadly cliff. The ocean below seemed hungry for a human. And yet, while there have been injuries on this section, there don’t seem to be any reports of deaths.

We spotted our first naked human at the Hanakoa river. As soon as she saw us, she ran off into the jungle. Over the course of this trip we observed four general categories of people: day hikers, short term visitors with permits, part-time residents and full-time residents. There were very few full-time residents; people who have chosen to permanently live off the grid and in the valleys along the Kalalau trail. There were quite a few part-time residents who had set up camps and appeared to have enough to live off of for at least a few weeks. Some were friendly while others seemed really stoned or just reclusive.

By the time we reached six miles, the sun had come out and the trail was beginning to dry. We passed a few more people who had successfully crossed the cliffs and while they warned that some portions of the trail had been washed out, overall, they reported, it wasn’t too bad. Quite suddenly we looked down and realized we were just above the infamous cliffs. It was scary. The trail led almost indiscernibly into the rock. We could see a few sections where it had been partially washed out. It did not look safe. We took a break and read a Psalm which reminded us that these cliffs, this ocean, and our steps are all subject to deeper authority. We continued and met a group of three, with one member who was really struggling with a terrible fear of heights. Seeing someone else even more afraid than us encouraged us and gave us new confidence. We spent some time trying to figure out a way to help, but in the end I think they had to turn back. We crossed the cliffs with no problems and enormous relief. In hindsight, while this section of trail is dangerous, it’s no more dangerous than many other sections of the trail. The main difference is that you can more clearly see where you could fall to your death because there are no plants or trees to obscure the view below.

The scenery grew more spectacular at every turn for the next few hours until we arrived at Kalalau beach. 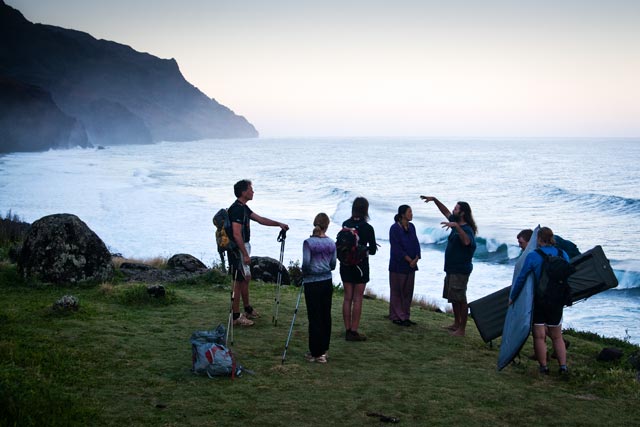 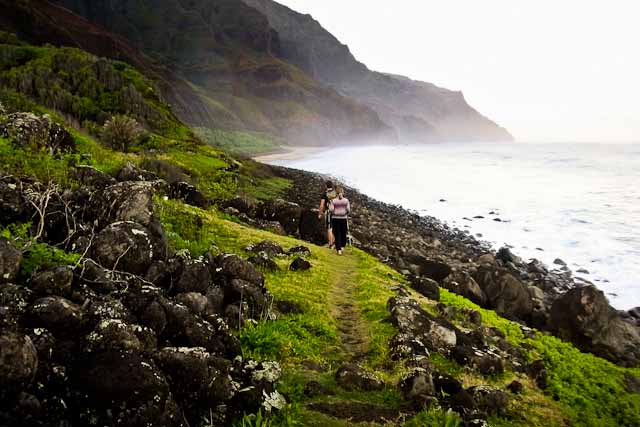 We relaxed on the beach for a few hours and ate dinner, but the long hike in had consumed our energy. Kalalau Beach is remote and sheltered by 4000 foot cliffs so as soon as the sun went down, the stars popped out brilliantly. At the time it would have seemed an unimportant detail, but the nearest land facing the beach is Japan.

Sometime in the middle of the night we awoke to the sound of a helicopter flying low and someone talking on the PA system. At first we thought an offshore boat was in trouble, but as the helicopter circled the beach and bright lights flickered across our tent, we listened more closely. The message was repeated and it sounded like “put the camp fire out”. Still half asleep we weren’t thinking clearly. After the helicopter circled three or four times, I realized the message might actually be “get to higher ground” so I stumbled out of the tent with my headlamp on. The helicopter landed and within a few seconds the co-pilot appeared clutching his helmet. With no wasted words he explained that a tsunami was coming and we needed to get to higher ground. I asked, “when is the tsunami expected?” The co-pilot replied, 3 AM. “What time is it now?” “12 AM”, he said. “That means we’ve got time to pack our things, right?” “I wouldn’t, I’d get out of here right now”, he said. Followed by, “it’s really tough flying right now, I’ve gotta go.” In my confusion I asked him if we could get a ride out to which he refused.

Panic set in. We grabbed a few things and threw our shoes on. I couldn’t believe it, but my shoes didn’t fit. It was as if my feet had grown 3 sizes. Then I realized my insoles had been drying and I had put them in backwards. Our camp was backed by a cliff so we grabbed a few things and took off running toward the valley. As we passed other tents or saw headlamps, we stopped to warn those campers. By the end of the beach we had a group of six, although we had seen at least 10 other campers earlier that day. We just hoped that they had understood the message.

Of course none of us knew how high we needed to get or how high we actually were in the dark night. Luckily we came across two Kalalau residents who guided us to a higher location about half a mile into the valley. One member in our newly formed group had a satellite phone so over the course of the next few hours we picked up some vague information about a large earthquake in Japan and a tsunami heading straight for us. It seemed like we were safe from the waves, but our gear and our rental cars would surely be lost. We were grateful for the helicopter’s warning.

Around a campfire, the Kalalau residents in our group gave us a great introduction to the valley and how they had ended up there. I guess a 500 mph wave travelling toward you is one way to build a quick bond between strangers. During the night we heard a few loud waves, but the seas had been rough all day so it was difficult to tell whether the tsunami had hit. There was also the chance of follow up waves due to aftershocks so we waited until first light.

As we hiked toward the beach I scanned the ocean for our gear. To our surprise, the waves hadn’t even reached the bluff. For some reason the tsunami hit Kauai very lightly. It was almost a letdown after living the previous 7 hours under the impression we had survived a series of apocalyptic waves. Exhausted, we crawled back into our tent for a nap. 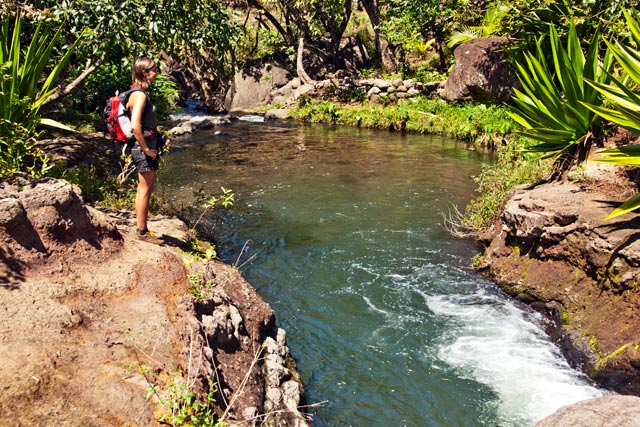 During the night’s conversation, we had learned that the water in the valley was safe to drink untreated so we filled bottles and set out to find fruit in the valley. The valley trail is about 2 miles long, but we quickly lost it on various side trails. Throughout the year there are various fruits, vegetables and herbs, but we looked pretty hard and only found a few oranges, limes, tomatoes and small mangos. While we didn’t find much to eat, the beautiful river pools and lush jungle offer countless opportunities for future exploration.

That evening our resident benefactors and fellow tsunami survivors treated us to a dutch-oven-baked, macaroni and cheese casserole, with garlic, onions, tuna and fresh herbs from the valley. They took pride in offering this delicious meal and we were honored. 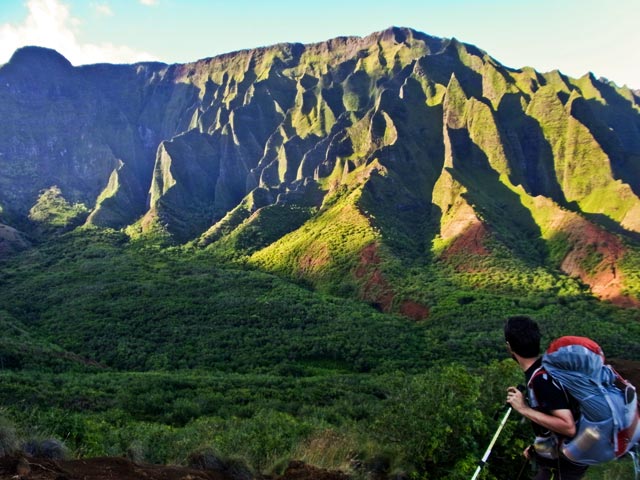 All 6 of our survivor party were on the trail just after 7. Once again we dreaded the cliffs as the trail was wet from rain the night before. By the time we arrived at the cliffs, the sun had begun to dry them up and we crossed safely. The rivers had receded somewhat and we were able to rock hop across them all without getting wet.

Incoming hikers offered dismal anecdotes of the destruction in Japan and the far reaching effects on California, Oregon and Washington and other Hawaiian islands. It seemed we had been uniquely spared. The further we hiked, the more intense the reports of carnage.

This was a strange way to see Kalalau for the first time, but it was fascinating to see how this particular micro world responds to a world catastrophe. We had to move to higher ground and then we took a nap. I think maybe it’s this kind of disconnect from society that some find so appealing in Kalalau.